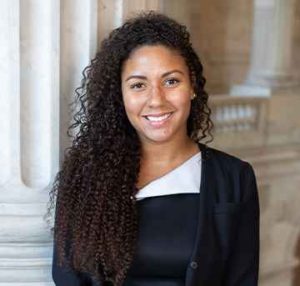 Chloe M. Brown serves as the Congressional Black Caucus Foundation Energy Fellow on the House Committee on Oversight and Reform, where she focuses on many issues including energy and environmental oversight. Previously, Chloe served in the office of Congressman Cedric Richmond (D-LA). Her legislative issue areas included energy, environment, maritime and transportation and infrastructure. As a member of the legislative team, Chloe advised the congressman on H.R. 9, the Climate Action Now Act and led meetings with various stakeholders and constituents. Additionally, she has co-sponsored bills and co-signed letters on behalf of the congressman, while also drafting legislation on energy and environmental issues.