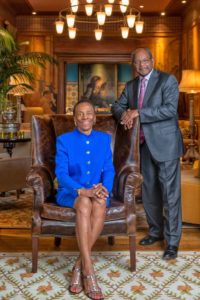 Eddie C. Brown is chairman, CEO and founder of Brown Capital Management. Eddie boasts over 43 years’ investment experience, serving as VP and portfolio manager at T. Rowe Price Associates, Inc. for 10 years before starting his own firm in 1983. He was also a regular panelist for 25 years on the nationally televised program Louis Rukeyser’s Wall Street and was inducted into the Wall $treet Week with Louis Rukeyser Hall of Fame.

Eddie earned a BS in electrical engineering from Howard University, a MS in electrical engineering from New York University, and an MBA from Indiana University Kelley School of Business. He holds two professional designations: Chartered Financial Analyst (CFA) and Chartered Investment Counselor (CIC). He also received an honorary doctorate in public service from Morgan State University and an honorary doctor of business administration from McDaniel College. He is a member of the Board of Directors of Open Society Institute (OSI)-Baltimore, of the National Cabinet-Woodrow Wilson International Center for Scholars, and of the Advisory Board of the University of Baltimore. Eddie was appointed to the ERISA Advisory Council by the U.S. Secretary of Labor, where he served a three-year term. Eddie also added “Author” to his illustrious accomplishments with the release of his inspiring autobiography, Beating the Odds – Eddie Brown’s Investing and Life Strategies.

C. Sylvia Brown’s career pattern has been divided between education and business. Sylvia taught middle school in Red Bank, New Jersey and in Hyde Park, New York. She also taught at the Baltimore City Community College and for five years she was assistant director of Admissions and Registration. On the business side, Sylvia worked for thirteen years in property development and management of the Brown family’s real estate in Baltimore City.

Sylvia has volunteered all of her adult life in community activities. She is currently a volunteer at the Women’s Network of the Enterprise Foundation and mentors at an elementary school in Baltimore City. She is on the Advisory Board of the Johns Hopkins Bloomberg School of Public Health and is a member of the Johns Hopkins Urban Health Institute’s Community Collaborating Committee. In 2009, the Governor of Maryland appointed her to the board of directors of the SEED School of Maryland. She is also on the board of Arts Every Day and was the Chairperson of the Greater Baltimore Medical Center/Maryland Public Television Women’s Healthcare Conference.

Married for over 54 years, Eddie and Sylvia’s community and philanthropic efforts have been extensive. In early 2002, their Brown Family Foundation announced the creation of the Turning the Corner Achievement Program (TCAP), an unprecedented education initiative for African-American middle school students in Baltimore. In 2012, they joined the Woodrow Wilson National Cabinet as founding members. Eddie serves on the Cabinet’s Investment Committee and Sylvia serves on the Fellowship Committee. In 2013, the couple received honorary doctorate of humane letters from Johns Hopkins University; the first husband and wife to do so in the history of the university. The twosome also received honorary doctorate of humane letters from Maryland Institute College of Art (MICA) for their extraordinary contributions in the arts, education and community. Most recently in 2015, the couple was awarded honorary doctorate degrees from their alma mater, Howard University.