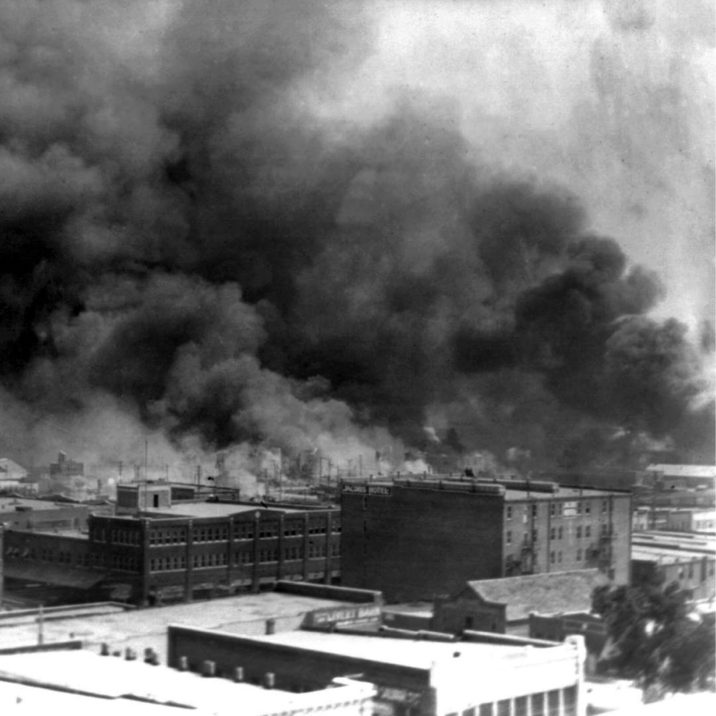 Prior to the massacre, Tulsa, Oklahoma, was recognized nationally for its affluent African American community, also known as the Greenwood District, and was referred to as “Black Wall Street.” But, in June 1921, a series of racially charged events nearly destroyed the entire area when Greenwood was looted and burned by white rioters. The actual death toll has always been in question. According to the Tulsa Historical Society and Museum, “thirty-seven death certificates were issued for deaths directly related to the massacre, but historians estimate up to 300 people were killed, 8,000 left homeless, 23 churches burned, and more than 1,200 homes destroyed. The economic impact would be more than $26 million today in inflated adjusted dollars.

Nicole Austin-Hillery, President and CEO of CBCF, said, “Monday was a historic day for all survivors and family members of the Tulsa community affected by the 1921 Tulsa Race Massacre. This attack was among the worst attacks of racial violence in U.S. history. It changed the trajectory of Black residents’ lives forever. Black people were gunned down, and Black-owned businesses were burned to the ground before their very eyes. It also changed the opportunity to maintain, build and pass down wealth to generations of Black Tulsa families.

Imagine the devastating intergenerational trauma this incident has caused for these three survivors and their descendants. Their request for punitive damages, a hospital in north Tulsa, mental health and education programs, and a Tulsa Massacre Victims Compensation Fund is a fair and justified request that should be granted swiftly. I have had the honor of working with the Tulsa community and the tireless activists and descendants who have spent lifetimes making many sacrifices to seek justice. Monday’s decision is a 100-year overdue first step in the right direction toward racial justice that brings new hope and some small measure of justice for the ‘Black Wall Street’ community and the descendants who continue to live with the effects of this fateful moment in history.”

For interviews with Nicole Austin-Hillery or members of the CBCF staff, please get in touch with Kyla M. Clark at media@cbcfinc.org.

Nicole Austin-Hillery is the President & CEO of the Congressional Black Caucus Foundation (CBCF).

Before joining Human Rights Watch, Ms. Austin-Hillery was the first Director and Counsel of The Brennan Center’s Washington, D.C. office, which she opened in March 2008. At the Brennan Center, she oversaw the growth and development of the Center’s advocacy and policy development work in Washington and served as its chief representative before Congress and the Executive Branch.

Ms. Austin-Hillery has testified before state and local legislative bodies and Congress. She has published numerous pieces for major news outlets, including The Washington Post, Time Magazine, The Hill, CNN.com, and others. In addition, she is a frequent speaker on a host of progressive issues.

Before her time at the Brennan Center, Ms. Austin-Hillery litigated at the law firm of Mehri & Skalet, PLLC, as part of the firm’s civil rights employment class action practice and as the George N. Lindsay Civil Rights Law Fellow at the national office of the Lawyers’ Committee for Civil Rights Under Law in Washington, D.C. where she focused on housing litigation and policy.

She served as the 2018-2019 President of the Washington Bar Association, is a past President and current Board member of the Washington Council of Lawyers, formerly served as an Advisory Committee Member of the ABA Standing Committee on Election Law, serves on the Board of Common Cause and is a former co-chair of the ABA Criminal Justice Section’s Defense Function Committee. She has also been an adjunct civil rights professor at the University of the District of Columbia David A. Clarke School of Law. In addition, she is a former Wasserstein Public Interest Fellow at Harvard Law School. Ms. Austin-Hillery is a Howard University School of Law and Carnegie Mellon University graduate.