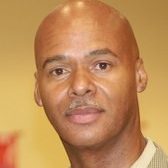 Dr. Errol Anthony Henderson is Associate Professor of Political Science at Pennsylvania State University, where he teaches international relations, US foreign policy, the analysis of war and peace, and African Politics. He earned his PhD in Political Science at the University of Michigan, Ann Arbor in 1993.  He is the author of more than 40 scholarly publications including three books—the most recent, African Realism (2015); and he has lectured throughout North America, Europe and Africa. He was born and raised in the Brewster Projects on the east side of Detroit.  He was a noted student and community activist and he helped lead two successful student movements; the first, in 1987 in response to racist threats against black women on the campus of University of Michigan led to profound changes on the University of Michigan campus.  Henderson also helped lead an extended protest that included an eleven-day building occupation at Wayne State University in 1989 that led to the creation of a long sought after Department of Africana Studies. Henderson served as the Director of the Peace Program for a community based non-profit organization, Save Our Sons and Daughters (SOSAD), which consisted of the families and friends of children killed in Detroit. Henderson organized, developed, and extended the peace programs under the leadership of SOSAD’s founder, Clementine Barfield, who was the survivor of her teenaged child’s homicide.  He helped establish SOSAD chapters throughout the country; and participated in the National Urban Peace and Justice Summit (the Gang Summit) in 1993 that brought together over 200 gang members from 22 different cities to attempt to implement a national truce. Although he resides in Pennsylvania, he continues to support activist and institution building initiatives in his hometown. For example, he is a founding sponsor of the Liberation Film Series at the Charles Wright Museum of African American History just blocks from his original home in the Brewster Projects. The Series brings historical and contemporary films and activists associated with them to the local community such as the recent program that screened a documentary on the Black Panther Party (BPP) accompanied by a presentation and discussion with Kathleen Cleaver, the first woman member of the Central Committee of the BPP, which Henderson moderated. He is presently completing research on two books; one on the role of religion in world politics, and another on the role of culture in the black liberation struggle of the 1960s and 70s entitled The Revolution Will not be Theorized. He is the faculty advisor to Penn State University’s Black Caucus.