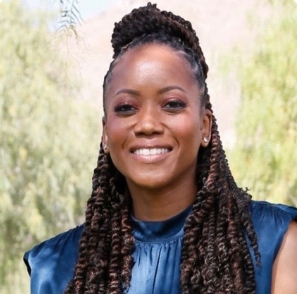 Ms. Alexander wears many hats, including actress, trailblazing activist, entrepreneur, creator, producer and director—one of the country’s boldest, most daring, and powerful voices. As a creator, she recognizes that entertaining stories, when socially conscious and carefully constructed, have the capacity to create impact and meaningful change. As co-founder of Color Farm Media, she is on a mission to bring greater equity, inclusion, and diverse representation to both media and electoral politics.

Color Farm is also currently producing two podcasts. On Reparations: The Big Payback, they are partnered with The Black Effect Network and iHeartMedia. Finding Tamika, which will premiere in March 2022, is in partnership with Audible and SBH Productions (Kevin Hart / Charlamagne Tha God). Color Farm also has several scripted film and television projects in advanced stages of development. Ms. Alexander also previously co-wrote the Buffy the Vampire spin-off, “Giles,” a graphic novel collaboration with Joss Whedon and Dark Horse. And Ms. Alexander co-created the award-winning, ground-breaking sci-fi series, “Concrete Park,” which was published by Dark Horse.

Ms. Alexander has also stepped into the arena of film director. She is currently co-directing a documentary film about the first reparations bill for African Americans entitled The Big Payback.

In addition to her entertainment career, Ms. Alexander is a critical thought leader on racial and gender equity and leadership. She serves as a Board member for One Fair Wage and Exponent, and is highly involved with many other social and racial justice orgs, including The Poor People’s Campaign, Color of Change, NAACP, UNCF, and others. Her work in content reflects the social activism work she does on the ground.

A sought-after speaker, Ms. Alexander delivers keynotes on topics including leadership, communications & performance, and diversity & inclusion. Born in Winslow, Arizona, Ms. Alexander grew up in Flagstaff before moving to Philadelphia.