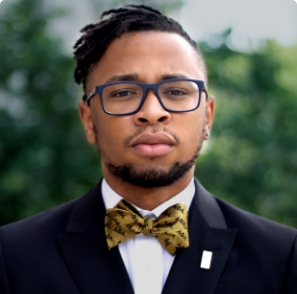 Mr. Harper, a Southwest Philadelphia native and a proud product of the School District of Philadelphia. He currently attends the American University, in Washington D.C., as a part of the awarding-winning Frederick Douglass Distinguished Scholars program and is currently majoring in public relations strategic communications with a minor in education.

When Mr. Harper was 17 years old he co-founded UrbEd Inc., a nonprofit that advocates for a quality and efficient urban education, by working to disband the school-to-prison pipeline, increasing teacher diversity, improving building conditions, and advocating for local control of schools.

In his role as Assistant Vice President for Alpha Phi Alpha Fraternity, Incorporated, Mr. Harper has the opportunity to serve on the board of directors for the internationally recognized fraternity, lead courageous conversations, assist with building innovative systems, all while providing service and advocacy for a wide range of communities.

Mr. Harper has a mission to create sustainable change for generations. His advocacy work and desires have allowed him to serve as the founding executive director of UrbEd Inc., national policy director for Student Voice, School District of Philadelphia k-12 Counseling Advisory Group, and as a Commissioner on the City of Philadelphia Youth Commission. Mr. Harper’s dedication has been featured in Good Morning America, TIMES magazine, The Washington Post, PBS NewsHour, and The Philadelphia Inquirer.

Mr. Harper looks forward to entering the classroom after graduating from American University while pursuing his master’s degree.