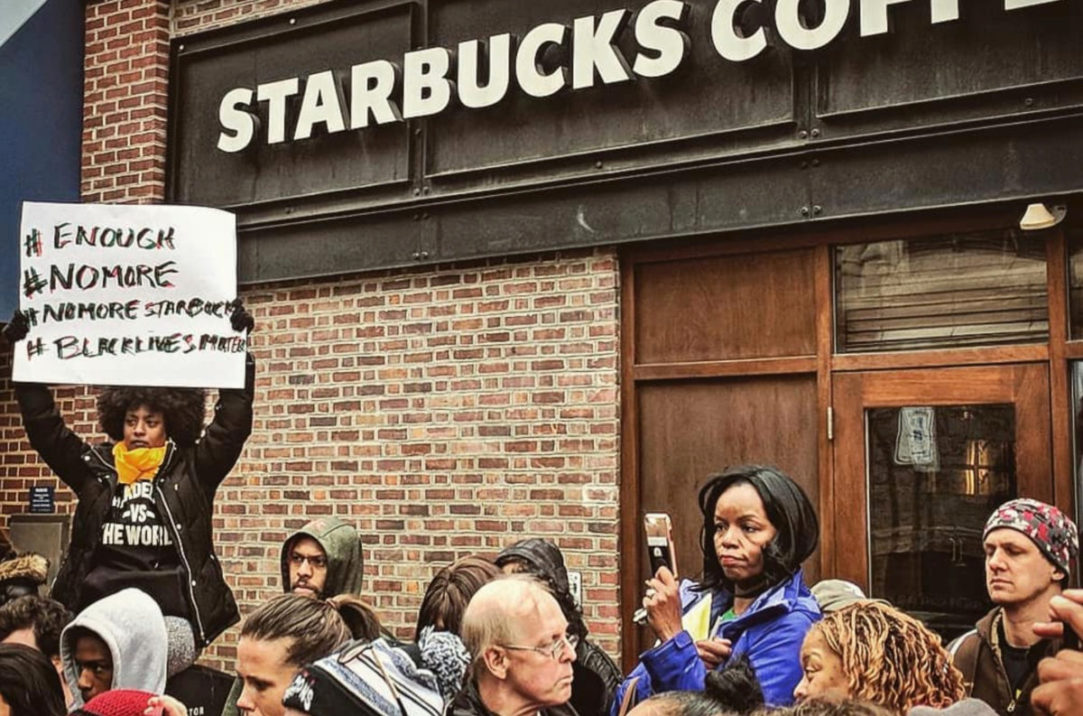 When two African American males entered a Philadelphia Starbucks on Thursday, April 12, 2018, they were denied a basic human right; use of the establishment’s public restroom. According to the store’s manager, they were denied this right per company policy that restrooms are reserved for “paying customers only”.

There are several aspects of this incident that require immediate attention and correction.

If this is truly company policy, it is discriminatory towards low-income communities in every area of this country. How? Well, let me explain. The cheapest item at Starbucks still costs $.75 before tax – and it’s a package of cream cheese. The average regular Starbucks customer spends between $30 and $40 a month (pretax) on their coffee and pastry cravings. This is nearly $500 a year, far above the disposable income of poor people in this country. This policy, coupled with the menu of pricey items means that not only can poor people not afford to regularly purchase a Starbucks cup of coffee but because of their circumstance, they also cannot afford to use a Starbucks restroom.

After being denied use of their restroom, the two African American males continued to their seats where they were waiting to meet another friend for a scheduled business meeting. While waiting for the friend at their table, the store manager approached the business men and asked if they would like to order. They declined service at the time. At the store manager’s request, police were immediately summoned to remove the men from the store. The two men were publically humiliated as police entered, demanded they leave and proceeded to place them in handcuffs.

In the aftermath of the incident, several articles such as one published in the USA Today posits that this incident of discrimination was unjust due to the fact that the men were “neatly groomed, wearing casual clothes and not causing a ruckus.” I would submit, even if they weren’t, this discriminatory and racist behavior would still be unjust.

Since the era of Jim Crow, Black people and minorities have been too familiarized and accustomed to being denied service for various trivial reasons.

I believe it is worth asking, what caused this manager to think she was justified in this type of overt discrimination? While I do not believe this incident is the generalizable culture of Starbucks, I do believe, in the aftermath of the election of Trump, it has become incorporated in the culture of America.

I assure you, incidences of this caliber are not isolated in today’s time. Countless minorities can recount stories of being stalked by law enforcement officers in malls, stores, neighborhoods, and now, even in coffee shops.

In an interview about the incident, Rashon Nelson, one of the two men arrested, stated that as he was handcuffed and taken to jail, he wondered whether he would make it home alive that day. We cannot underestimate the effect of this incident. Black boys and men all across this country’s fear of police presence is validated by the vast number of murders of unarmed Black men each year at the hands of law enforcement officers and vigilantes.

Though unwarranted and undesired, these occurrences of stereotyping, racial bias and discrimination are opportunities for authentic discourse and resulting action.

Why must authentic discourse result in action? We talk too much. We’ve talked about racism, bigotry and discrimination for far too long. If there is to be a true, genuine conversation, it must include a plan to disband cycles and systems of bias in the culture of our society. The lawmakers and business owners who enable these systems to persist must be present during this discourse.

Though retroactive, I must commend Starbucks CEO for a powerful and swift response to this incident, starting the discourse in all stores, closing all Starbucks (including the headquarters) for a bias training on May 29, 2018.