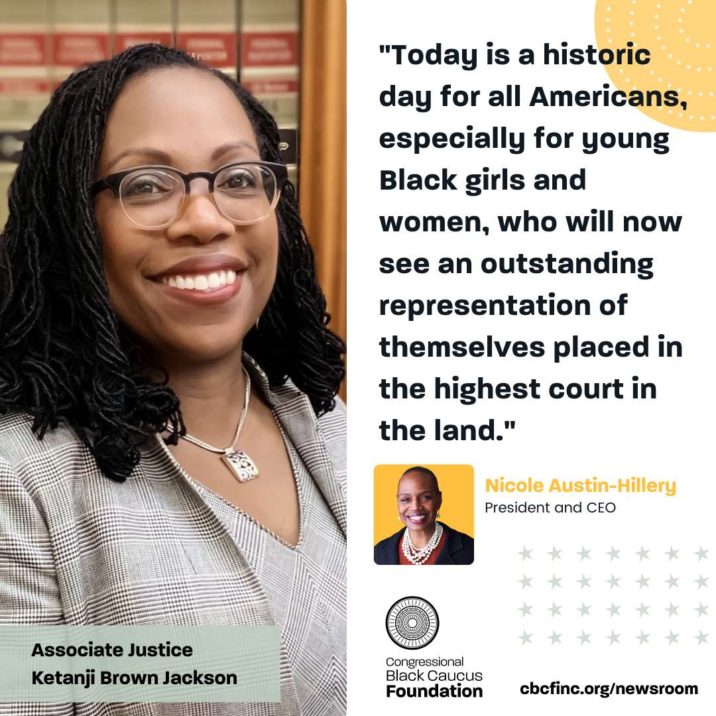 “On behalf of The Congressional Black Caucus Foundation, Incorporated, I would like to congratulate Judge Ketanji Brown Jackson on her trailblazing appointment and confirmation.

Today is a historic day for all Americans, especially for young Black girls and women, who will now see an outstanding representation of themselves placed in the highest court in the land as the 116th Associate Justice of the United States Supreme Court. This is what true democracy looks like.

Judge Ketanji Brown Jackson has proven to be one of our nation’s brightest legal minds with exceptional credentials and an unwavering dedication to the rule of law. From her time as a public defender through her role as a circuit court judge in the United States Court of Appeals for the District of Columbia, Judge Jackson has proven that she is committed to equal justice under the law and understands the profound impact the Supreme Court’s decisions have on the lives of the American people.

Today has proven that President Joe Biden and the United States Senate made the right decision. One that was principled and committed to equal justice. We must recognize this has been an opportunity long denied to Black women, and now there will be a fourth qualified woman as the next Associate Justice of the highest court in the land. Now is the time for the voice and leadership of Judge Brown Jackson, and this is her position to hold. Congratulations, Associate Justice Ketanji Brown Jackson.”