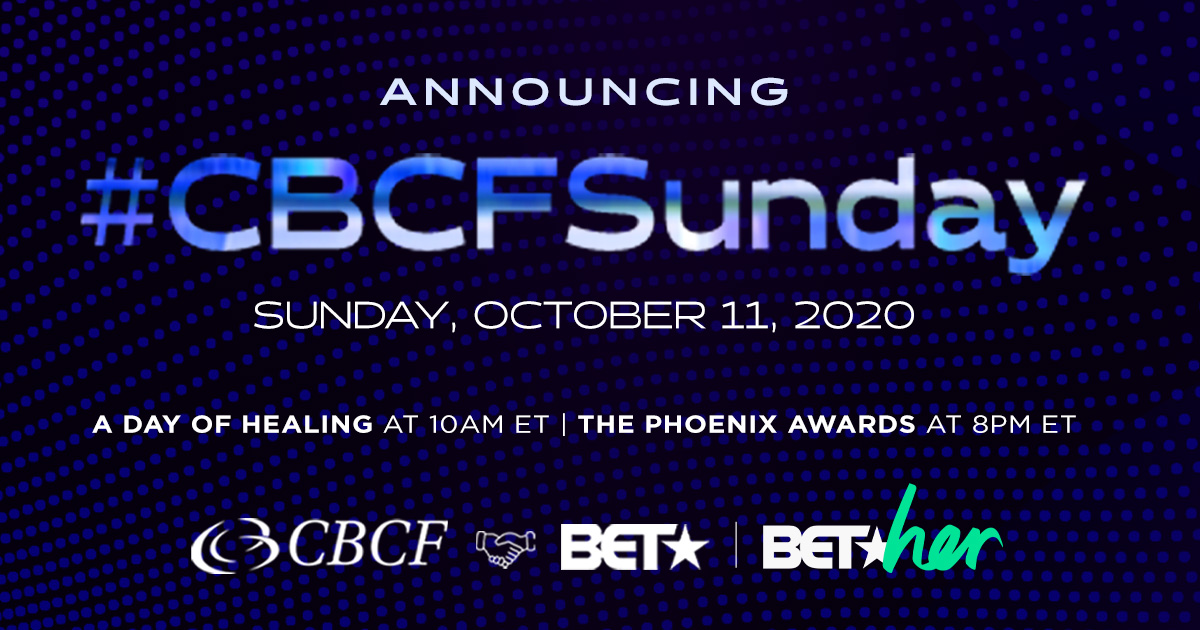 WASHINGTON – Today, the Congressional Black Caucus Foundation, Inc. (CBCF) announced a partnership with BET to broadcast “CBCF Sunday.” The broadcast will feature two signature events, the Phoenix Awards and Day of Healing, for CBCF’s first-ever Virtual Annual Legislative Conference (ALC). Viewers will be able to tune-in Sunday, October 11 at 10:00 a.m. ET to watch a pre-taped airing of the Day of Healing, followed by the Phoenix Awards at 8:00 p.m. ET on BET and BET Her. Viewers can also watch each show online.

“We are thrilled to partner with BET to broadcast two highly anticipated events held during the first-ever Congressional Black Caucus Foundation Virtual Annual Legislative conference,” said CBCF President and CEO, Tonya Veasey. “BET has been a long-time supporter of the Congressional Black Caucus Foundation and a prominent voice within Black America. During an unprecedented time in our nation’s history, this partnership with BET will bring a new awareness to a broad audience. This programming will showcase ALC discussions of issues impacting African Americans and the global black community.”

This year, CBCF will celebrate virtually a Day of Healing, to kick-off CBCF Sunday on BET, in lieu of its annual traditional Prayer Breakfast. Similar to former prayer breakfasts, CBCF’s Day of Healing will feature spiritual inspiration with a host of celebrities, political leaders, top gospel artists and ministers. Gospel superstar Kirk Franklin will host the Day of Healing and the message will be delivered by T.D. Jakes, Bishop of The Potter’s House Church. Taraji P. Henson will host the virtual annual Phoenix Awards, which supports the CBCF’s Leadership Institute. The Virtual ALC Phoenix Awards will recognize individuals who have made significant contributions to society.

“The Congressional Black Caucus Foundation’s ALC is one of the leading public policy convenings on issues impacting African Americans and the global Black community,” said Scott Mills, President, BET. “We are proud to be working with our long-time partner, CBCF, to showcase CBCF Sunday during ALC, and it is our distinct privilege to pay tribute to the legacy and achievements of extraordinary individuals. As we continue to spotlight Black excellence, we also look forward to empowering and inspiring viewers like no other brand can.”

This year’s virtual Phoenix awards will feature a lineup of notable speakers including remarks by former U.S. Vice President Joe Biden and U.S. Senator Kamala Harris. Additionally, the members of the Congressional Black Caucus will be honored for their service, accomplishments, and efforts to eliminate the many disparities that continue to exist for millions of Black Americans.

The 2020 Phoenix Awards honorees and more special guests will be announced in the weeks ahead.

This year, Virtual ALC, held August 31 – October 2, allows attendees to customize their own agenda, select from more than 80 sessions based on their interests, and experience the ALC programming they have become accustomed to from the comfort and safety of their homes. Registration for programming is provided at no cost, and can be completed on the virtual conference site at cbcfinc.org/alc.